A Series of Self-Portraits

Working in a traditional style and media, I hope to show how our contemporary dialogue around selfie culture mirrors historic understanding of truth in representational art. Specifically, my work recalls 19th century Naturalism and the art of Cecilia Beaux, Elizabeth Jane Gardner and Ilya Repin. Influenced by both the Realist and Neoclassical schools of art, these artists’ works negotiate a visual and conceptual understanding of truth.

The era of smartphones has enabled the general population to capture almost every aspect of their lives and share them instantaneously with a global audience. A visual product of this evolution is the selfie, a self-portrait taken with an individual’s camera phone and shared to social media. Associated with “real life” and “live” access the selfie is praised for its authenticity.

Social media apps like instagram stress the importance of authenticity through their design: Instagram users can only upload photos through their personal phone. My own process reflects this devotion to the authentic. 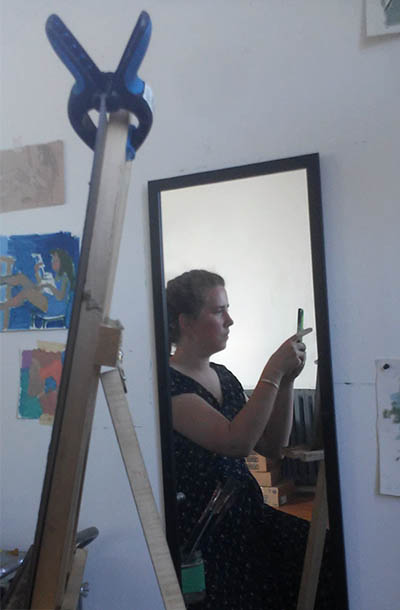 Done in a traditional figurative style my art prioritizes accuracy and is done working directly from life using a mirror. This choice to work from life gives each work unique temporal boundaries. Throughout the series I explore the relationship between time and essence of being. Paintings with a looser brush handling were done in as little as one sitting and represent specific and fluid moments of being. In contrast those works that show more finished style were done over several weeks and reflect a more general and fixed state. In this way the work negotiates ideas of the subconscious and external selves.

Despite this sense of authentic reality the selfie is criticized for depicting an idealised version of oneself. Social media “influencers” are accused of composing and curating their identity to show a more perfect version of themselves. Amalia Ulman‘s Instagram series “Excellences & Perfections” highlights the performative nature of selfie culture. In her photo essay she satirises how femininity is often depicted on social media while simultaneously throwing into question the role of authenticity in selfie culture. By creating an alternative identity through her instagram account Ulman makes evident the staging that goes into a selfie. Her work highlights the imbalance between the time spent constructing an image and the sense of immediacy that the photographic medium suggests.

Like the selfies that Ulman critiques, my own work requires a certain amount of construction. To best express the central idea of each work I control my costume, pose and expression. What separates my work from Ulman and the selfie is my choice to employ a traditional time consuming method to capture my images. Working from life means that I face and stay with that staging for the longer time of creation. Spending anywhere from six hours to six weeks on a single image means that each selfie becomes a kind of authentic lived experience. 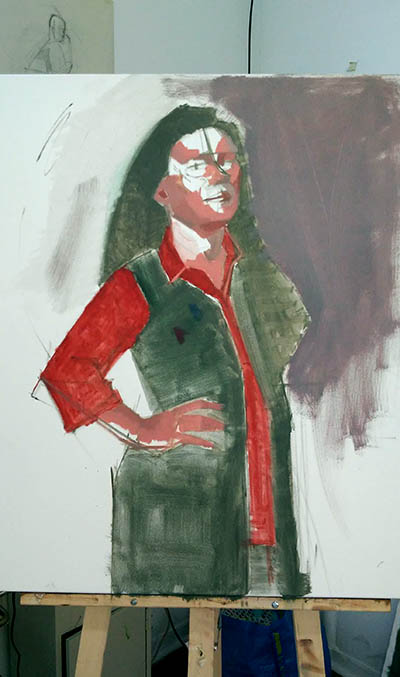 The proliferation of selfie images was aided by the introduction of the reverse camera on cell phones. This reverse camera replicates the experience of looking into a mirror. My own selfies are done using a mirror (instead of a photo image). I’m interested in the association between mirrors and self discovery.

By limiting myself to a single subject composition, marks and material became the central focus of the work. In this way the series becomes a way to expand my artistic style. I push myself to experiment and try new approaches with each piece. As the series progressed I found myself carrying forward certain choices. These choices have slowly culminated into the emergence of a new style. By presenting the viewer with a series of impressions about my personality, this work actively demonstrates the progression, evolution, and establishment of my style and identity as a painter.

The time spent on the creation of each image provides a space for self exploration and development. I invite the viewer to look beyond the subject of the work and consider this series as an expression of experience opposed to a statement of identity.